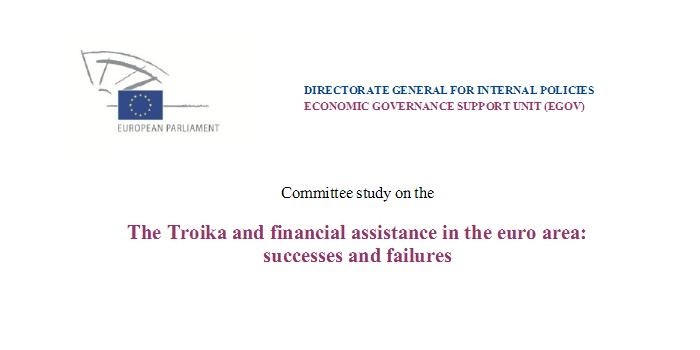 THE TROIKA AND FINANCIAL ASSISTANCE IN THE EURO AREA: SUCCESSES AND FAILURES

This study provides a systematic evaluation of financial assistance for Greece, Ireland, Portugal and Cyprus. All four programmes, and in particular the Greek one, are very large financially compared to previous international programmes because macroeconomic imbalances and the loss of price competitiveness that accumulated prior to the programmes were exceptional. Yet programmes were based on far too optimistic assumptions about adjustment and recovery in Greece and Portugal. In all four countries, unemployment increased much more significantly than expected. Although fiscal targets were broadly respected, debt-to-GDP ratios ballooned in excess of expectations due to sharp GDP contraction. The GDP deterioration is due to four factors: larger-than-expected fiscal multipliers, a poorer external environment, including an open discussion about euro area break-up, an underestimation of the initial challenge and the weakness of administrative systems and of political ownership. The focus of surveillance of conditionality evolved from fiscal consolidation to growth-enhancing structural measures. The Greek programme is the least successful one. Ireland successfully ended the programme in December 2013, but problems remain in the banking system. Exit from the Portuguese programme in May 2014 appears feasible but it should be accompanied by a precautionary credit line. It is too early to make pronouncements on the Cypriot programme, which only started in May 2013, but it can safely be said that there have been major collective failures of both national and EU institutions in the run-up of the programme.