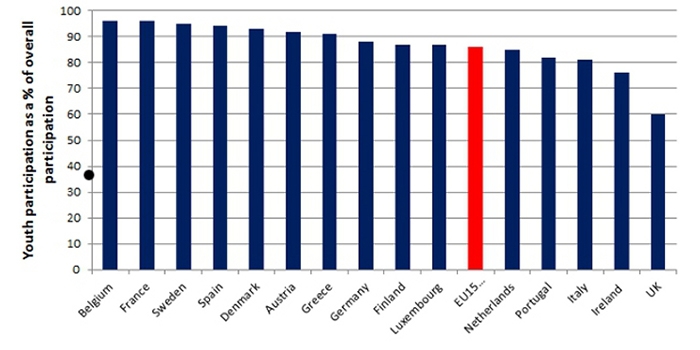 REBUILDING THE CONNECTION BETWEEN YOUNG PEOPLE AND POLITICS

Electoral abstention is a symptom of voter scepticism and marginalisation. Political representation, however, is a two-way street. If we want to rebuild the connection between young people and political institutions, policy makers must wake up to their burden of responsibility.

The next general election may be the last in which 16 and 17-year-olds cannot vote. Extending the vote to 16 has institutional support at the European level. In the UK, however, the vote at 16 may not be an equal one. In January, shadow justice secretary Sadiq Khan confirmed Labour is considering compulsory voting for 16 and 17-year-olds, arguing that we must “get [young people] into the habit of voting” – a direct reference to the current crisis in electoral turnout. Increasingly, young people do not vote and continue not to vote as they get older. Now, we may be about to punish them with fines for failing to do so.

Forcing people to vote is one way to fill a ballot box. But compulsory voting would miss the wood for the trees. Poor turnout is a symptom of the deep marginalisation of young people in our democracy. The reason for young marginalisation is not that young people have fallen out of the habits of democracy, but that they have been left out in the cold during a dual economic and political crisis in the UK. Votes at 16 could be our opportunity to better welcome them back into our democratic system, and better represent them as equal democratic subjects. 16 and 17-year-olds who are granted equal electoral rights elsewhere turn out able, interested and motivated as fellow citizens. Is the vote at 16 our chance to do the same in the UK?

Young people in the UK face a perfect storm of intersecting economic crisis and political marginalisation. Young people today can expect the worst prospects of any generation since the Second World War, including the lowest social mobility in the OECD. In 2010, the unemployment rate for the young was more than three times higher than for older workers. For those who find work, stable employment, full-time contracts and home ownership have been replaced by precarious work, often in the service industry, on part-time and temporary contracts. Those who can afford to undertake CV-enhancing internships, or who are forced to do so, may even work without pay.

At the same time, the UK as a democracy has left young people out in the cold. Their political interests are considered to be expendable. The dismantling of the EMA and the U-turn on university tuition fees exemplify how safety nets and services for the young have been slashed while comparable provisions for older generations stay fortified. Looking at the political marginalisation of the young in more detail since the 1980s, public policy has defined youth as a period in which people in their teens and twenties undertake a “pro-social and conformist” civic pathway. This pathway provides young people an apprentice citizenship, reflecting the perspective that we must “nag and guide and push” young people to behave as society expects: earning and learning, volunteering in the local community, having children at an acceptable age and, of course, turning out to vote.

The apprentice model for citizenship provides limited political agency. In exchange for being nagged and guided through socialisation to adulthood, young people who earn and learn are promised economic prosperity. In more specific terms, young people on the pathway to adulthood are considered clients of a legalistic public system that they should trust to defend their private interests. The U-turn by the Liberal Democrats on tuition fees reflected the extent to which young people’s interests were expendable, but was also evidence of their understanding of young votes. Policy had to change as defending private interests took precedence over what young people voted for.

The principle is enacted in public and in policy. Although vigorous efforts are made to directly represent other demographics among the population at large in Parliament – as, and rightfully so, with women and ethnic minorities – there is no comparable move to represent younger citizens. Distrust, dissatisfaction and protest are denounced as self-centred truancy, as it was for the “dangerously apathetic” young people who turned out in strike action and protest against the invasion of Iraq in 2003. More recently, the Riot Communities and Victims Panel on the English riots in 2011 acknowledged social and economic causes, but laid responsibility on young people who needed greater “character building [and] personal resilience” . Although risks have proliferated and safety nets have laid bare the failures of the apprentice citizenship model during the economic crisis, the principle of apprentice citizenship is reinforced by policies that refuse to fully acknowledge such risks, maintaining that a stable pathway based on personal diligence – earning and learning – will lead to economic stability and political agency.

Young people are less likely to vote than older citizens across Europe, but amongst the UK’s comparable neighbours in the EU-15, their disengagement from elections is somewhat balanced by growing diversity in political behaviour. Not so in the UK, which represents an outlier, an extreme case where young citizens are decoupled from political institutions in all forms of engagement.

The graph above demonstrates that young marginalisation in the UK is not just from elections but from political institutions across the board. The fact is that voting isn’t a problem in itself but a symptom of young people’s detachment from political institutions on the whole. That young people support political institutions, democracy and elections in principle but feel profoundly sceptical of the utility of institutional political engagement in effect is supported by a rich body of research in the UK, and not least by the extensive work done by Matt Henn and colleagues since the 1990s, along with others that I reference in my own work. The message that politicians don’t listen, don’t care, and don’t keep their promises has dominated young testimonies to researchers over the last twenty years. Electoral abstention is a symptom of scepticism amid young people’s political marginalisation.

Political parties are right to worry that young people are marginalised from the institutions that serve to represent them. Representation, however, is a two-way street. If we want to rebuild the connection between young people and political institutions, institutions and the policy makers within them must wake up to their burden of responsibility. In a democratic society, they must show young people that they are members of that society, and for that reason their interests are going to be effectively represented by institutional politics. Education will continue to play an important role in preparing young people for citizenship and informing them of diverse ways to make a difference in the democratic process, both by their own direct participation and through representative methods for democracy. This must be accompanied by policy that welcomes young people as
meaningful democratic subjects: as voters, abstainers, dissenters, protesters, party members, and volunteers in the same way we welcome all other citizens into our democratic system.

Votes at 16 will send a powerful message to 16- and 17-year-olds that they are valued citizens, that they hold responsibilities in society, and as such, they deserve the right to vote. At a historical moment in which young people are suffering the worst economic crisis since the Second World War, and after decades of their marginalisation from politics and neglect in the policy process, the compulsory vote at 16 would be a powerful message to the contrary. This generation already suffers more than their share of poverty, political marginalisation and blame. The vote at 16 is an opportunity to reverse the trend of inertia and indifference towards the crisis of youth. We must not miss our chance.