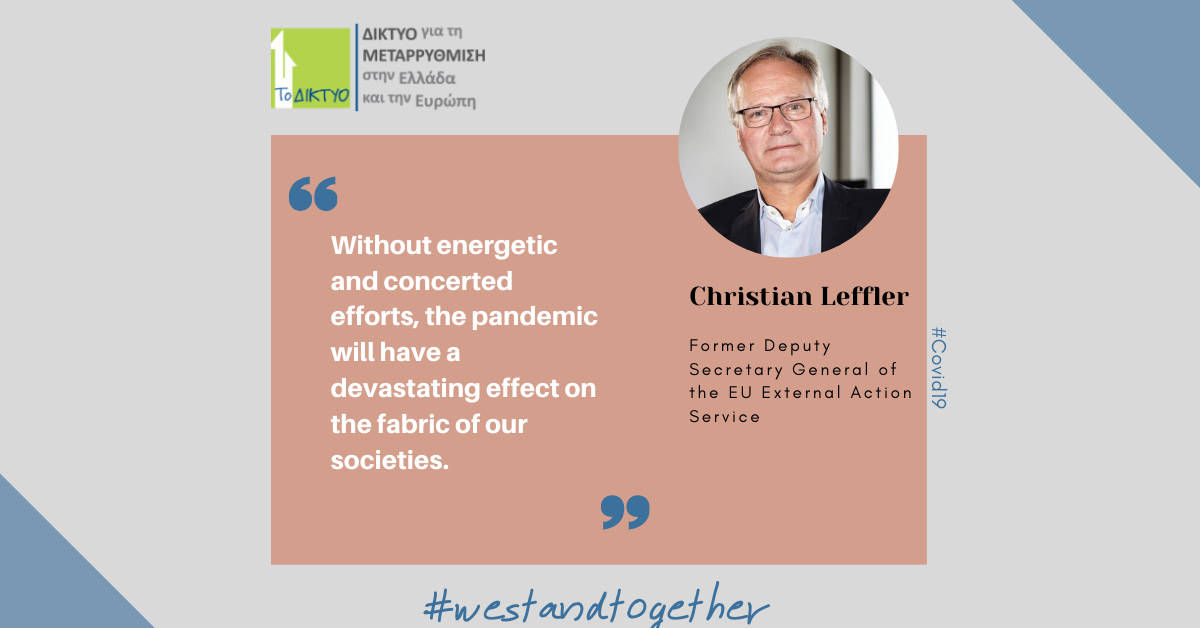 What Now? What Next?

Upon retiring from public service, I left Brussels early March for a family break in New Zealand. Little did I know, or even imagine, that we would return, three weeks later, to a radically transformed reality. Self-isolation was not on the agenda when we left – it caught up with us in the last week in New Zealand. The full impact of the global Coronavirus crisis became clear as we travelled back across the world through empty airports and arrived in a Brussels so quiet that the second Sunday in August would look positively throbbing by comparison.

So what now? How do we best protect ourselves against the spread of the virus, and how can we mitigate its impact on the economy and on our societies? The first reactions of governments across Europe were, frankly, not very impressive. Self-centred and uncoordinated, they failed to turn our close web of integration into an advantage and instead tore open breaches in it by closing borders not just to people but to many goods as well – including, outrageously, essential medical supplies. Nothing of that stopped the virus from continuing its spread across Europe.

Interestingly, different national approaches do not seem to have had a significant impact on the infection rates. Sweden’s advisory policy and limited restrictions have, so far, not led to an increase in cases very different from that in similar-sized countries that have adopted more draconian shutdown measures, like Belgium or Austria. Will this last? I hope so. It is a delicate balance to strike between the immediate concerns for the health of individuals and the broader responsibility for the health of the economy.

The EU was equally slow in the uptake. Partly this can be explained, as so often, by issues of competence. Healthcare remains essentially a national responsibility. Emergency and national security provisions were used to bypass common rules and limit free movement. But there was also a serious underestimation of the scope and challenges of the pandemic, just as there was in many, if not most, capitals and indeed initially at the WHO.

Since then the wheels have got spinning and the Commission has taken a string of initiatives to deal with the immediate, the near term challenges and the longer term consequences. Coordinated procurement of medical supplies will relieve pressure and ease bottlenecks even though outrageously selfish national behaviour remains a stumbling block, the use of the civil protection mechanism facilitates the mobilisation of care and support across borders. The easing of budget and state aid rules allows member states to mobilise economic support packages, and the temporary unemployment backup scheme being contemplated will help them extend support to the economically most vulnerable. The massively stepped up support to research should speed up progress towards a vaccine. The coordination of repatriations has already helped 350.000 stranded Europeans return home.

All this is good. But more is needed, and more should be coming, particularly as we begin to chart a way out of confinement and a gradual return to a more normal course of life. Not the status quo ante, things will have changed, but a situation where our societies will open up, people can return to work, studies or other daily chores and we can begin to rebuild the economy – and rebalance political life.

So what next? How do we prepare an exit strategy that will allow us to restore common frameworks and develop new ones where they are needed, rebuild trust between nations and among citizens, and find again the compass for our common endeavours? The EU is actually pretty good at learning and adapting, and contrary to some I am confident that the Union will emerge out of this crisis scarred, wizened but ultimately strengthened, too. In my view there are five key areas which provide challenges and opportunities in equal measure.

First, the economy. The costs of confinement are almost incalculable. In fact we cannot fully assess the damage until lockdown is lifted and we see what lasting impact there is on economic activity and employment. The short term measures put in place, in particular to support SMEs, the backbone of the European economy, are important – in terms of speed and simplicity inspiration should be drawn from the Swiss example of government and banks working together. In the longer term the mobilisation of large scale funding – credit and even grants – will be essential.

The ongoing discussion on the use of the European Stability Mechanism is a step in the right direction, though finance ministers stumbled, again, in their last video meeting. The increased lending of the EIB as well. Large scale ECB purchases of national debt and, ultimately, mutualised debt in the form of common bonds or similar instruments would be further ones. Had the ECB been able to offer credit directly to Italy, Greece and others ten years ago the overall cost would have been significantly lower to the European economy, let alone to the countries concerned. Of course such lending would not, and should not, come without a clear commitment to long term structural reform. My bank won’t lend me unconditionally, either.

Today’s crisis also coincides with the multi-annual budget negotiations. It would be a mistake to come out of it with even further downward pressure on the total spending frame. The common budget remains a very small part of total public spending in the EU, and the overall amounts will anyway be lower following Brexit, but we have seen in the past and we see it now again that the additional European spending can tip the scales – or prevent them from tipping against you. This should be the moment to recognise the benefit of pooled funding for common programmes, not to scale back.

Second, the markets. The Single Market remains the EU’s signature achievement and the competitiveness of European business depends on it, but it has been seriously dented by some of the derogations introduced in this crisis, self-claimed or collectively agreed. The Commission will have to muster all its legal and political clout to roll back limitations to free movement and to reinstate strict state aid rules to ensure fair and transparent competition. Some of the state aid and competition rules may have to be re-thought – that was already under way before the corona virus appeared – but we know from experience that temporary exceptions tend to get sticky and stay.

There will no doubt also be calls to delay climate change objectives and timetables. These must be resisted; on the contrary, the massive capital injections and other policy measures offer a unique opportunity to accelerate the greening of the European economy.

Then there are the international markets. Global trade, already under pressure from the US-China stand-off, has taken a beating. The EU remains heavily dependent on international trade, for its supplies as well as its output. It is of vital interest that global value chains are re-established and that the flow of goods and services picks up again. The Union should reconfirm its free trade agenda and team up with likeminded partners, bilaterally and at the WTO.

Third, and closely linked to the preceding two, there is the social dimension. Without energetic and concerted efforts, the pandemic will have a devastating effect on the fabric of our societies. Contrary to what Madonna said from her rose-petalled bath, the virus is not “the great equaliser”. As always, the most fragile and exposed will be the hardest hit. It is not the bankers who anguish over their bonuses (or pay them out as soon as they can, as in some unsavoury examples) who will be hit; it is the laid-off worker, the temp with no more temping offers, the old whose meagre pension will no longer last until the end of the month. And it is the young, the next generation. In the short term, the SAFE initiative for a pan-European unemployment reinsurance scheme is welcome and necessary. Building on that, and on the economic stimulus packages, new initiatives to promote employment and to facilitate labour mobility will be vital.

Fourth, the politics, the rule of law and the rights of the individual. Exceptional circumstances require exceptional measures, we have been told, repeatedly, over the past month. True, but not so exceptional that they become the rule. Many governments have been granted – or taken – authority to rule by decree. Some of this may be necessary, though there are examples of the executive and legislative powers working in almost seamless coordination to ensure that measures taken have received parliamentary scrutiny and approval.

Whatever the national custom and situation, the key for the future is a full return to open societies and the rule of law. These are the values that lie at the heart of the EU and they must be defended vigorously. The autocratic opportunism we have seen in Hungary, and now also in Poland, must be resisted vigorously using every possibility under the Lisbon Treaty. This is about people’s trust in the Union, and about what we stand for to the rest of the world.

Which brings me to the fifth point, the international dimension. The pandemic is global and while Europe has been hard hit the danger to other societies is very real, especially in the developing world. Years, or even decades, of hard-earned progress in many countries risk being wiped out by the coronavirus. Mobilising support is not about altruism or solidarity, noble as these ideas are. It is about the EU’s own interests. Supply chains require stability and mobility. Prosperity opens markets. People will flee insecurity and exclusion, not just in situations of conflict but where prospects are uncertain and ambitions frustrated. So out of self-interest and a sense of solidarity Europe has every reason to redouble its engagement with partner countries.

Health, of course, will be in focus, but beyond the immediate the health of societies and economies will be more important. Support to the neighbourhood countries should focus even more on socioeconomic reform, education and employment, and be accompanied by new investments and market opportunities – knowing that this will only succeed if there is also a stable and open political environment. The new Africa strategy, presented by the Commission days before the corona lockdown, needs to be reviewed and upgraded before it is even adopted. The opportunities offered by the web of partnerships in Asia and the Americas should be pursued proactively. Debt relief should also be considered for the most vulnerable nations.

The corona pandemic has left many in a state of shock. Will we ever get over it? Of course we will; we always do. As Albert Camus wrote in The Plague, “Once the faintest stirring of hope became possible, the dominion of the plague was ended.” But when it ends we must not forget its lessons nor lose our compass. There will be new challenges to deal with and old ones. As we regroup and rebuild, let us do so in a sensible and forward-looking manner which incorporates a strategy to address the truly existential question we face: that of climate change.