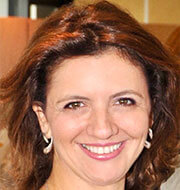 Sophia Hiniadou Cambanis is an attorney at law and cultural management advisor. She holds a BA in Law (Athens University), a DEA in Public Law (Paris II Pantheon-Assas University) and a MA in Economics of Culture, Policies and Management (University of Rome TorVergata). She served as Head of Cultural Affairs for the Presidency of the Hellenic Republic, special advisor on International and Cultural Affairs at the Ministries of Culture, Foreign Affairs, Development, Justice and Press and Mass Media. She has also served as Head of Cultural Affairs of the Hellenic Presidency of the Council of the EU (2014), responsible for Cultural Affairs at the Embassy of Greece in Rome (2010-2013), Representative of the Hellenic Foundation for Culture to Maghreb countries (2000-2005) and China (2005-2008), Executive coordinator of the Cultural Year of Greece in China (2007-2008) and board member of various cultural institutions. She has participated, planned and organised cultural and educational events, publications, international conferences and fora in cooperation with European and international institutions. She currently works at the Scientific Service of the Hellenic Parliament.