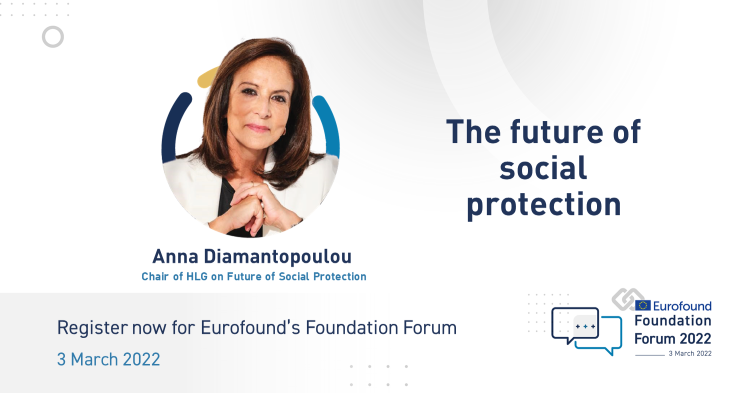 Back to 1881, when the foundations of the welfare state laid, Bismarck affirmed that the state should offer the people in need “a helping hand in distress…Not as alms, but as a right”. The EU has passionately served this purpose and expanded the welfare state.

I was fortunate enough to serve as a Europeancommissioner during the period where two major changes took place: the enlargement of Europe and the introduction of Euro.

Today, several years after these milestones Europe (steadily and increasingly and despite fierce criticism from within) is still a pole of attraction and a dream formany countries that would like to be members of our union.

Our discussion this afternoon is taking place under theheavy shadow of the unfolding fatal events due to the Russian invasion of Ukraine.

Ukrainians, in the midst of bloodshed, appeal for the EU to fast-track its membership application. The Georgiansare following the same way too.

This demand is obviously linked to the fear caused by the proximity to Russia but also to the vision of freedom and democracy.

A key component of real democracy is the functioning of the welfare state in all its activities and a key component of freedom is the free expression of thought and the right to hold opinions.

The large number of authoritarian leaders from Trump to Bolsonaro is largely due to growing social inequalities, the marginalisation of large parts of the population, neglecting the issues that older people are facing and thehopeless new generation.

This is what distinguish EU from countries with authoritarian leaders and this is the core of our discussion today.

The welfare state, social protection for all, the strong ability of social mobility (especially for the younger generations) are the key elements that strengthendemocracy, create prosperity, realise human potential. In addition, all the above are essential elements in ensuring that democratic countries will be able to withstand any form of crisis.

In the last three economic, health and now geopolitical crises, Europe has matured, strengthened, learned fromits mistakes and even in countries with a very deep crisis such as Italy, Greece, Spain, Ireland, democracy was not threatened at all.

The welfare state, the family structures, the support from the EU played a vital role in keeping the societies upright and thus the democracies.

To be very concrete, giving examples of progress during the last two decades, I would like to refer to some concretations. Strong reduction in poverty: we see that ten years ago there were around 40 million people in EU 27 faced severe material deprivation. It was 10% of the total population. Today, it is 5,5% 24 million.

Second important issue is the progress made in the labour market integration of women and older workers. We have tried hard, there were many policies in place and there was a lot of financial support for this. Now, among women the employment rate increased from 56% in 2000, the time that I was Commissioner and we have set concrete quantitative goals concerning women unemployment. Today it has increased to 67%. Among persons aged from 55-64 employment increased from 35% to 60%. These are very concrete elements and it is because of concrete policies.

Last but not least, I would like to make a reference to europeanization of social issues starting from Lisbon Strategy in 2001 up to day with the Action Plan and Porto Summit and using the Open Method of Coordination, we see day by day that social policies are coming more and more as a priority to the European Union.

Ageing population. Demographic is a very big problem for Europe and it has two main issues: how we can ensure adequate pensions and long term care for older people. Second important issue is the new world of work and how we will adapt the social protection systems to this new world and how we can make sure that all workers have effective and adequate access to social protection systems taking into account the non-standard forms of work.

Last point which constitutes a persisting challenge is lifelong learning and digital skills. How we retrain and reskill people and I think we cannot be very satisfied with what has happened in the majority of member states compared with the needs because of the changes in our era.