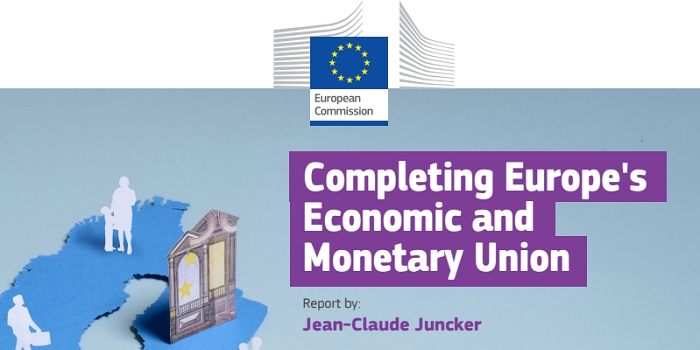 The Euro Summit of October 2014 underlined the fact that ‘closer coordination of economic policies is essential to ensure the smooth functioning of the Economic and Monetary Union’ (EMU). It called for work to continue to ‘develop concrete mechanisms for stronger economic policy coordination, convergence and solidarity’ and ‘to prepare next steps on better economic governance in the euro area’.

It has benefitted from intense discussion with Member States and civil society. It builds on the report ‘Towards a Genuine Economic and Monetary Union’ (the so- called ‘Four Presidents’ Report’), on the Commission’s ‘Blueprint for a Deep and Genuine EMU’ of 2012, which remain essential references for completing EMU as well as on the Analytical Note ‘Preparing for Next Steps on Better Economic Governance in the Euro Area’ of 12 February 2015.

This report reflects the personal deliberations and discussions of the five Presidents. It focuses on the euro area, as countries that share a currency face specific common challenges, interests and responsibilities. The process towards a deeper EMU is nonetheless open to all EU Members. It should be transparent and preserve the integrity of the Single Market in all its aspects. In fact, completing and fully exploiting the Single Market in goods and services, digital, energy and capital markets should be part of a stronger boost towards economic union, as well as more jobs and higher growth.

A complete EMU is not an end in itself. It is a means to create a better and fairer life for all citizens, to prepare the Union for future global challenges and to enable each of its members to prosper.