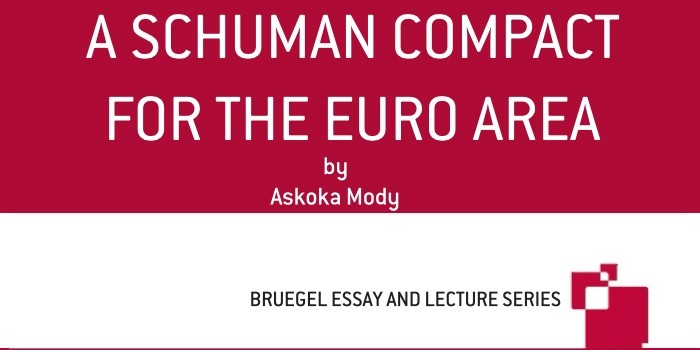 A SCHUMAN COMPACT FOR THE EURO AREA

Five years of crisis have pushed Europe to take emergency financial measures to cushion the free fall of distressed countries. However, efforts to turn the crisis into a spur for “an ever closer union” have met with political resistance to the surrender of fiscal sovereignty. If such a union remains elusive, a perpetual muddling ahead risks generating economic and political dysfunction. It may be time to recognize and render more effective the de facto decentralisation in Europe.

The Schuman Compact, proposed by Ashoka Mody and published today by Bruegel, is based on the idea that since the very inception of the EU, Europe’s leaders have been unwilling to cross a threshold that compromised core national sovereignty. Instead, the solidarity visualized by Robert Schuman in his 1950 speech can be achieved through three agreements that allow national governments to move forward within a coherent framework.

• The Fiscal Compact: The delegation of European fiscal governance to the European Commission has created complex structures that have encouraged costly delays, deceptions and half-measures. For this reason, fiscal policy should be the responsibility of the member states where the sovereignty lies. This concept is already present in the Fiscal Compact to which states voluntarily commit.
• The Sovereign Debt Compact: To minimise the risk of excessive future sovereign borrowing, a credible “no bailout” regime must ensure that private lenders bear losses when sovereign debt becomes unsustainable. This will require writing the possibility of restructuring in debt contracts, using sovereign CoCos.
• The Banking Compact: The current debate is focused on the intractable financing details of the complex banking union. But financial stability requires a much smaller euro-area banking system. The compact would encourage states to pro-actively downsize the growing crowd of zombie banks (using debt-equity swaps) while bolstering viable banks. A centralised banking union is desirable; but tackling the here and now must be the priority.

Ashoka Mody’s Schuman Compact creates a decentralised resting stop to reflect on the best course toward a more stable, more integrated Europe. Continuing to stumble forward could lead to a debilitating, if not fatal, fall.

I sincerely hope that this essay helps policymakers to reflect on the current approach to crisis resolution. Bruegel’s role as a think tank at the heart of Europe is to do exactly this: provide policymakers and citizens with new ideas and approaches to the most burning policy questions of strategic relevance. Decision-makers may decide to continue their current approach, to go forward with a strategy as outlined by me with colleagues of the Glienicker Gruppe, or decide to follow the path towards a Schuman Compact as outlined here. Reading well-argued pieces like this essay, and debating the central questions with the Bruegel community, will help in making the right decision.